Making Of: It Came in Gusts

The photo “It came in gusts” marks a time in my life, in which many positive changes happened. (It marks also a time in which I invented pathetic titles for my photos 😉 )

At that time there were many positive private developments after a rather dark phase. 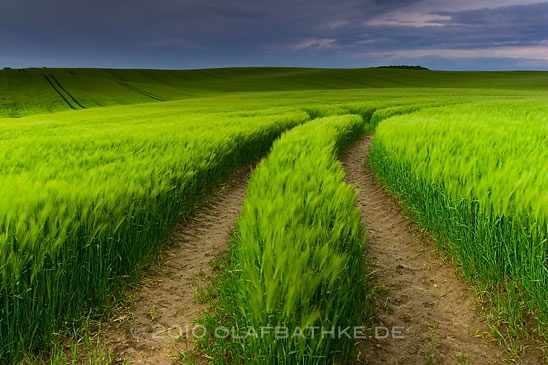 Interestingly enough this awareness of life is reflected in this photo, although it was not intended. The photo arouses rather intuitively.

At that marvelous early summer day a violent thunderstorm approached.

With a dramatic changing of the weather there is always the chance for a special photo to be taken.

I jumped on my motorcycle and drove into the fields.

At a young cornfield I stopped intuitively.

The lighting conditions were really exciting. I composed the best frame of this field for approximately one hour.

Under these sultriness thunderstorm air conditions suddenly a backwards coming wind was noticeable to me. The wind reached the airs of the ??rye and played with it. The play of the ears reminded me of undulations.

I had the idea to catch exactly these undulations. For this I screwed a grey filter in front of the lens. It gave me 2,5 sec for a time exposure that drew the ear in a diffuse way.

Now the only thing to do was waiting for the right light and gust.

Here at the coast a thunderstorm mostly approaches against the wind.

My calculation came up: Dark clouds were gathering in front of me, beginning to cover the sun, while the wind constantly whistles from my back.

If a thick cloud covers the sun a special light is appearing in the transition.

That is valid in particular for thunderstorm clouds.

And a special light mostly results in a special photo!

I did not pull the trigger very often, because the thunderstorm approached fast.

Tricky were the changes of the light conditions. I had to control the exposure all of the time.

More by accident I discovered the attraction of an small underexposure about minus 2/3 stop. It gave the final picture intensity.

The thunderstorm was violent! On the return trip the rain penetrated my motorcycle clothes up to the pants. But it didn‘t matter – I got wet all of the time.

At home there were some contrast changes and tone corrections in the post processing of the photo. Nothing special.

The photo is a timeless piece of emotion to me that will not bore after all those years.

I hope you enjoyed this making of. If you have any questions please write them in the comment.

Simplicity and The Adventure of Being a Photographer

Space for people and services I love to work with: