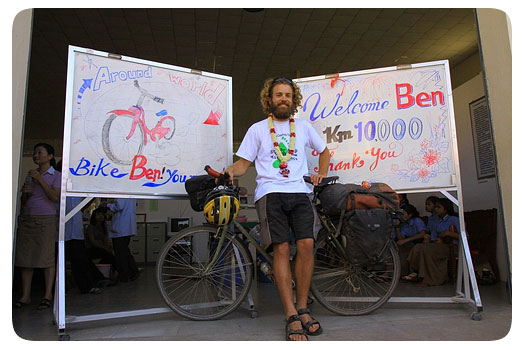 BikeBen’s arrival at the Cambodia Trust in Phnom Penh.

Six people sit around laughing as one women tries to communicate with me. I quickly come to realise that beards and long hair are certainly not attractive to Cambodians, as this is the second time today that I have been told this. As I get back on my bike with a smile on my face and wave them goodbye, I realise that this is it, just 50 km from Phom Penh, I probably won’t have any further such interactions, the end of the road has come.
Since leaving Budapest 200 days before, I have cycled almost 9,800 km in 12 countries requiring 6 visas, 10 land border crossings, once passing through a restricted area and twice changing from the right-hand side of the road to the left. I have pedaled up 12 mountain passes over 3,900 m and the highest being 5,500 m in India and down to -200 m in Iran in temperatures ranging from 45 to -10 degrees
Celsius. Rain has soaked me on just 3 days of biking and snow has fallen twice. I have seen 3 of the remaining 76 soon to be extinct Irrawaddy fresh water dolphins in the Mekong, and observed the massive damming, deforestation and mining operations which are leading to their demise.
Dogs have chased me on over 30 occasions but never seriously attacked. I have rolled past (or over) thousands of dead snakes, lizards, dogs, cats, horses and donkeys, all victims of speeding cars.
Dust storms in Iran caused by over exploitations of water resources in Iraq chocked the air and the residents of Tehran and made breathing difficult. I have inhaled for sure enough exhaust fumes from poorly maintained trucks and burning rubbish to make my lungs look like a smokers.
On a near suicidal dash to Istanbul I covered 162.6 km in one day and in India 7 km of arduous uphill was enough for a semi-rest day. Roaring tail winds propelled me more than 100 km across the desserts of Iran with little effort while brisk headwinds in Thailand kept my brakes on for a tough 70 km slog to the border. I broke the speed limit on 26 occasions, usually as I screamed down a hill and through road works.
My body burned every last ounce of fat as my weight plummeted by 10 kg. My legs grew while every bit of exposed skin turned brown. My beard and hair grew out to create the genuine caveman look which was enough to send small children scurrying in fright.
I had two accidents, once in Serbia where my pedal was damaged and had to be replaced and the second in Thailand where I had to pay for a damaged car and my rear view mirror got smashed. Beyond that the bike sustained little damage with 3 flat tires and a set of brake blocks, 3 new drink bottle holders and 2 bottles of chain oil being the only required spare parts. However, for others, I have built a rack from sticks, fixed a split rim with twigs and hose clamps, pumped tires, replaced spokes, adjusted seats and brakes, sewed up a torn tire and repaired a broken chain.
I consumed up to 7 normal meals a day and burned about 1.2 million calories of energy all washed down with around 600 litres of water.
I cycled with 28 other cycle tourists from 16 countries and met a further 80 or so.
I took over 9,000 photographs and logged more than 500 GPS positions.
I have been in the national newspaper in Serbia, TV in Cambodia and in a magazine in Iran. I received a gift from a Chinese army general and met the captain of the Bulgarian Air force.
Of the first 63 nights of accommodation, I paid for just 13. I slept about 40 nights in my tent, 16 nights with CouchSurfers, 3 with friends and the remainder in guesthouses, hostels or hotels.
I have listened to 15 languages and observed the subtleties and practices of 8 religions. I have taught 2 English classes in Laos and attended 5 others in Serbia, Iran and Cambodia. I have visited 2 ancient civilisations dating back more than 1,000 years Iran and Cambodia.
I completed an 80 km bike race on my touring bike in which I finished in the top twenty in a time of 2 hours 21 minutes with an average speed of more than 29 km/h.
And, most importantly, I have met hundreds of wonderful people and enjoyed every minute of it!

If you have not yet donated to the Cambodia Trust, please DO take the time to do so at: www.justgiving.co.uk/bikebensblog